It has been quite a while since I last posted… It is not because we have not been entertaining but I try to post different scenarios and recipes.  The holidays were hectic with family matters to contend with.

Here we are in Florida and we are still entertaining.  It’s St Patty’s Day down here Naples.  We attended the annual Naple’s St Patrick’s Day parade which was loaded with representatives from my home state of Massachusetts so it got us in the mood for Green. 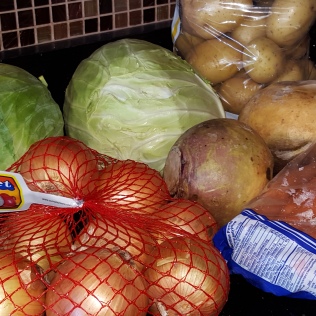 First you need a big pot.  We had to buy one since we didn’t have one in Florida.  There are two varieties of corn beef  – the cut is basically the same, a beef brisket that has been “corned” whatever that means.  They come  gray and red.  We prefer the gray but both taste great. We brought the gray down from Massachusetts and bought the red at our local Publix.  Fill the pot with water. Add plenty of garlic, pepper, a few bayleaves and the corned beef. Sometimes the cornbeef comes with a seasoning package, use if you like.  I think it makes it more salty. Bring the water to boil then bring the heat down to a simmer.  Simmer the meat for 20 mins/pound. We’re cooking seven pounds so we are starting the simmer at 2:30pm and plan to take the meat out and wrap in foil at 5:30pm.  DON’T THROW OUT THE WATER!!!  Cut up the turnip, potatoes, cabbage, carrots, and onions.  Add them to the simmering corn beef water.  Simmer until veggies are tender.  Check often since cabbage takes longer to cook than potatoes, for example. Remove veggies with a slotted spoon and separate into bowls or platter.  We usually arrange all the veggies on a large platter with the meat but since I don’t have a large platter, I will separate the different vegetables into bowls. Keep them warm while you slice the meat.  Sometimes we have put the meat back into the water to rewarm.  When you do go to slice,  slice thinly and on the bias.  Have  white vinegar and mustard to serve with the meat. 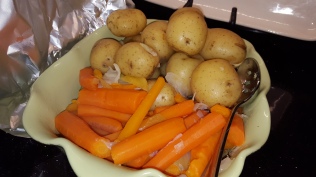