I find it interesting that not many people know how to set a table.  My parents entertained a lot and by helping my mother I learned the proper placement of silverware and plates.  I also realized I was a lousy teacher for my own children because they either are unaware of the correct way to set a table of they don’t really care.  I am not talking about where to place the fish fork or knife, (I am not an etiquette expert)  but just a normal everyday place setting.

So, looking at the picture above the salad plate goes to the left, whether it is up higher like this or directly beside, it doesn’t matter.  I don’t have the smaller bread plates with this set of china, my mother’s “Sunnyvale” by Castleton (I love this pattern) but if I did the salad plate would be on the dinner plate and the bread and butter plate would go to the left.  I don’t have butter knives with my sterling set but if I did it would go on the bread and butter plate.  The forks go on the left – work from outside in – the first small fork would be used first for the salad.  The larger fork in the middle would be for dinner, the small inside fork would be for dinner. On the right is the knife and then the spoon. If you are serving soup and have a soup spoon that would be laid above the plate horizontally. Water and wine goblets would go on the right as well.  The napkin can be placed on the left with or without a napkin ring or laid on the plate.

Lastly, a fun way to present your napkin (in this case, only paper would work) is the following.  My mother and whoever showed her used this a lot and taught us how to do it.  I like it because it is different and reminds me of a bird with its wings in flight.

First: Fold the napkin in half, diagonally. Second: Fold in half again. Third: fold one side about 1/2″ from the fold. 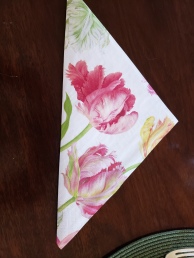 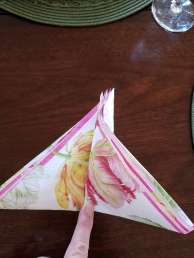 Fourth: Turn it over and do the same to the other side. Fifth and last step: If I look at the inside folded napkin I see a center fold.  Slide this fold into the space between the second and third tine of the fork and the two “wings” in the space between the 1st and 2nd tine and the 3rd and 4th tine.  Try it! 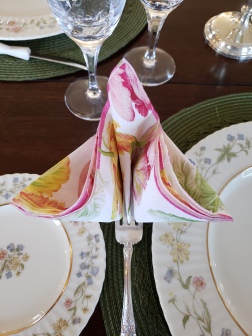 For the past two years to kick off the summer we have held at our home a pig roast for 150 of our nearest and dearest friends.  This year rain was threatening but we crossed our fingers and hoped for the best.  Our three kids and their boy/friends/girlfriends arrived early to help set up. We set up five tents and a borrowed “carport” tent just in case the weather took a nasty turn.  I had rented five 6′ tables and fifty chairs.  We provided beverages and desserts, the rest was provided by the “caterer” Ray, my husband’s customer, and his wife put on a fabulous pig roast that is second to none.  Ray trailers his smoke/roaster from his truck and pulls in with the pig that has been cookin’ since the night before.

Janet arrives with their staff in toe to set up the buffet.  Along with the pig, they provide they 30 racks of the meatiest ribs on the planet, BBQed beef brisket and hamburgers and hot dogs for the kids. We noticed that the kids opted for the ribs and pork, so next year, burgers and dos are out!.

The sides consist of potato salad, cole slaw and cornbread. 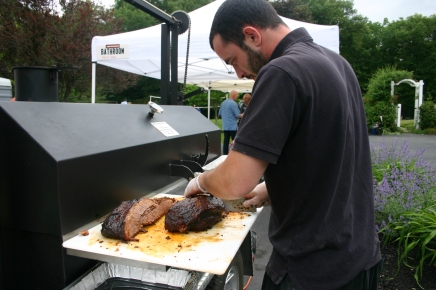 We provided beverages and many of the desserts were brought by the invited guests.  For entertainment we had a Corn Hole competition, Volleyball, and our neighborhood band provided music all afternoon and into the night.  After the band cleared out at midnight, Whoever was left sat around the pit fire into the wee hours of the morning.  A great time was had by all.

Well on October 26, 2013 we had a wedding.  The reception was held at a rustic locale – a local winery.  It was a brisk October day but the sun was out and that’s all we cared about.  The wedding was outside, the colors were “merlot”, how appropriate, and the flowers were typical fall colors.  The sunflower was the prominent flower.  The brides maids carried a sunflower with berries wrapped in burlap.

We decided to have different “antique-y”vessels for the centerpieces.  This was one of my favorites – a white toy pick up truck for the Sweetheart table.  Notice the tin cans trailing from the rear and the “Just Married” sign on the hood. 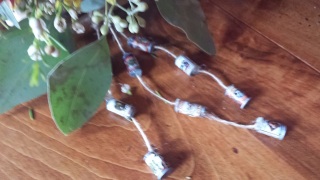 This bouquet was on the gift table.  The copper pail has been in the family for years – brought over from Sweden by my Grandmother.  We also use a copper kettle and my mother’s tarnished silver tea set.  Even the floral designers said it was one of their favorite weddings and fought over which container to use.  I had many of the guests take them homes I would be sure to get them back later. 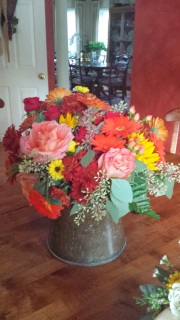 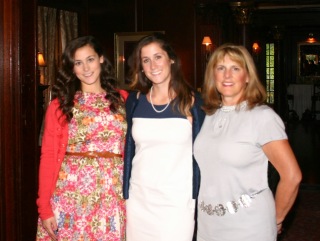 Bridal Showers can be a lot of fun or they can be deadly.  The deadly description was what we were trying to avoid when my daughter and I were planning her sister’s bridal shower.  The bride loves to bake so her very clever sister thought that a baking theme would be appropriate.  She designed these invites (with help from pinterest) tied up with bakery twine and enclosed a recipe card to be returned at the shower.  From the invites we had our color scheme – pastels – yellow, pink, violet, and green.

For favors, we continued with our bakery theme making vanilla using vodka and vanilla beans and letting it “steep” for 8-10 weeks.  We purchased brown 4 oz bottles, labeled them and tied them up with the bakers twine.  For the tables, we “painted” clear glass cake plates with a mixture of mod podge and food coloring and sprayed them with white glitter. Each were the one of the pastels of our theme and we made pies to act as centerpieces which would later be used for the dessert: yellow – lemon meringue; pink – strawberry rhubarb; green – key lime; purple – blueberry; white – apple.  Pastel sprinkles were sprinkled on the table cloth like confetti and completed the table design. 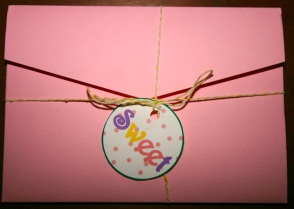 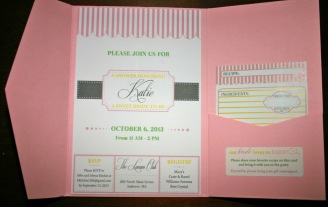 Because the bride did not want to open gifts a solution had to be found.  Our remedy was that as the guests arrived, their gifts were taken by the bridesmaids, unwrapped, labeled and displayed.  They then were escorted to the far end of the room where they were served mimosas and appetizers and asked to contribute an idea to the date night jar. Some were later read during the meal. The following poem explains the activity:

Their social lives pause, then tend to stagnate

Their lives get busy, time travels on

They get old and lethargic and often withdrawn

But Tyler and Katie will be wedded soon

And their last date cannot be their honeymoon.

So think long and hard as to what you would do

If given the chance for a fun rendezvous.

Take pink, green or YELLOW and write a suggestion

That will answer their challenging date night question.

YELLOW:  DATE NIGHTS THAT REQUIRE SOME CASH AND PLANNING

The meal was a simple buffet of assorted sandwiches, seasonal soup and salad and condiments.  Between the meal and coffee and dessert, a lips and mustache game was played where the guests were requested to guess who said what from a list of questions that were given to the bride and groom.  It didn’t require a lot of work and the guests learned more about the couple.  In the meantime, the pies were taken from the tables and cut and the guests were invited to sample them over coffee.  Leftovers were encouraged to be taken home. Since time was not taken for opening the gifts, concluding activities were to help the bride to write her vows,  to read some of the date night suggestions and perusing the gifts.The shower was only 2 hours long but was plenty of time to allow for visiting, catching up and visiting with the bride.  All in all, a successful and fun time.